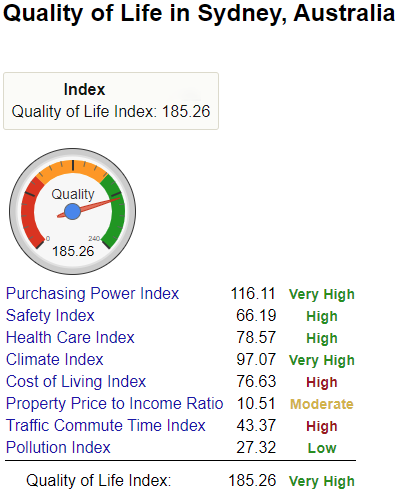 The 2022 half yearly global rankings are out. Sydney’s cost of living? 47th overall.

These indices are relative to New York City (NYC), which means that for New York, each index is 100%.

Definition of cost-of-living excl. rent is comprised of goods prices, including groceries, restaurants, transportation and utilities.

For example, a city with an index of 120 means it is 20% more expensive than New York.

Sydney’s is 77 which means it is 23% less expensive than New York.

Combining these two critical measures results in a Sydney index of 64, i.e. 36% better off than New York.

Despite our current challenges, Sydneysiders are OK, living in one of the most beautiful cities in the World based on Sydney’s cost of living, among other attributes.

About Cost of Living Indices.

Rent Index is an estimation of prices of renting apartments in the city compared to New York City. If Rent index is 80, it is estimated that price of rents in that city is on average 20% less than the price in New York.

Groceries Index is an estimation of grocery prices in the city compared to New York City. To calculate this section, weights of items in the “Markets” section for each city are used.

Restaurants Index is a comparison of prices of meals and drinks in restaurants and bars compared to NYC.

Cost of Living Plus Rent Index is an estimation of consumer goods prices including rent comparing to New York City.

buy-a-property-as-a-home-or-investment Buying a property comparable properties Desktop valuation Do I need a buyer's agent in Sydney? Our ideal client Renovating an apartment for the purpose of maximizing its sale price Rent or buy your home The auction lingo

Sydney’s cost of living
The 2022 half yearly global rankings are out. Sydney’s cost of living? 47th overall. These indices are relative to New York City (NYC), which means that for New York, each... Read more...
Our ideal client
Our ideal client is someone who enjoys their Saturday morning catching up on the weekend news and social media while getting their car washed i.e., they believe in outsourcing, not... Read more...
The Auction lingo
Having to bid at auction can be intimidating if not confusing when listening to the auction lingo, also known as the Auction Chant. I will only take rises of $10,000... Read more...

This is the second time Fred has helped us secure a property and he took away so much of the stress and pressure that can come with such a purchase....
- Jackie & Cem
READ MORE
We were first time buyers and Fred walked us through the process with care and attention and kept us very well informed.
- Gary
READ MORE
Fred and his team have in-depth knowledge of the industry, the current market conditions, and they have quality/trustworthy networks who they linked us with
- Nao Mi
READ MORE
We were recommended by a financial adviser to use Fred’s property search services for an investment unit in Sydney and we were certainly not disappointed. Fred, is a happy, engaging...
- Robert & Alison
READ MORE
When I decided to buy an investment property a few months ago, I started looking around myself, but soon realized I was totally out of my depth. I was a...
- Roland
READ MORE
PS4U helped me find my home in Coogee. I had some rather strict parameters and they found me the perfect property at the right price. Not only did they save...
- Elie
READ MORE 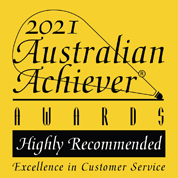